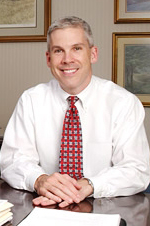 Chief operating officer and senior vice president David Hanson announced this week he is leaving VCU at the end of this year for an administrative position at the Phillips Exeter Academy in Exeter, N.H.

Hanson is in charge of the day-to-day non-academic operations at the university. Hanson will take the position of chief financial officer at the prestigious boarding school in southern New Hampshire.

Hanson was promoted to senior vice president from his position as vice president for finance and administration, and received a raise from $275,000 to $310,000, according to the Richmond Times-Dispatch.