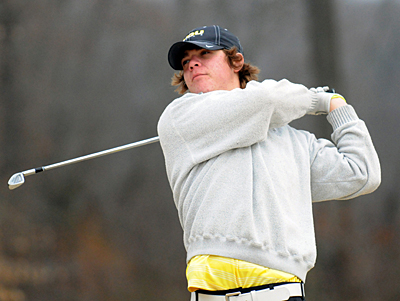 VCU sophomore Adam Ball put together an exciting run at this year’s U.S. Amateur Championship before falling in the quarterfinals of match play in mid-August.

After qualifying for the 113th annual tournament as an alternate, VCU sophomore Adam Ball eventually became one of eight amateur players worldwide competing for the very same trophy that Arnold Palmer, Jack Nicklaus, Phil Mickelson and Tiger Woods all hoisted in past years.

His run at The Country Club in Brookline, Mass. began Aug. 12 with 36 holes of stroke play, through which players qualified for the match play championship. Ball shot 72 on Monday (Aug. 12) and 69 on Tuesday (Aug. 13) to advance to the single-elimination match play bracket.

There, Ball would face Orlando, Fla. native Joey Petronio in the round of 64. The second-year Ram spotted Petronio a one-stroke advantage on the opening hole on Aug. 14 before storming back to win going away by a score of 6 and 4.

Playing in front of thousands of spectators and national television crews from the Golf Channel, the 19-year-old Richmond, Va. native insisted that the stage wasn’t too big for him.

“The surroundings of the golf course, having TV here and everything is just awesome,” he told the Virginia Golf Association. “Being in such a historical place and around the best amateur players in the world—it’s great to be a part of it.”

But Ball wasn’t merely there to participate in the nation’s oldest golf tournament. He was there to assert himself as one of the game’s greatest rising stars.

Ball, the three-time Virginia Golf Association (VSGA) Junior Golfer of the Year took the course on Thursday morning matched up against the No. 12 ranked amateur in the world, according to Golfweek.

England’s Max Orrin put up a test, taking the lead with a birdie on the ninth hole, but Ball fought back to win two of the next three holes and capture the victory on the back-nine, defeating Orrin 2 and 1 in his round of 32 match.

Ball successfully carried Thursday morning’s momentum into his afternoon match-up with Chelso Barrett. After struggling out of the gate (or the first tee) in his first round of the day, Ball got off to a hot start the second time around.

He compiled a four-stroke advantage through seven holes against the New Hampshire native on Thursday afternoon, and surrendered just one hole altogether en route to a 6 and 5 defeat of Barrett in the round of 16.

Ball entered the weekend as one of eight remaining amateurs in pursuit of the U.S. Amateur Championship.

Once a long shot to even qualify for match play, Ball was suddenly up against the highest placing amateur at this year’s British Open and the second-ranked player in R&A’s World Amateur Rankings.

A date with England’s Matt Fitzpatrick on Aug. 16 proved to be the last straw for Ball, who garnered heaps of attention for his surprising run to the quarterfinals.

After a fairly even front nine, Fitzpatrick’s surge of three consecutive victorious holes after the turn opened an insurmountable lead and effectively concluded Ball’s Cinderella story.

He expressed disappointment about his final nine holes following his defeat, but reassured everyone that this was no fluke.

“The front-nine I played really well, but the putts just weren’t falling,” he said in an interview with the United States Golf Association (USGA). “When I got to the back-nine my swing left me a little bit. I could have played a little better but I’m extremely happy with how I played this week.”

When asked about his future runs at the U.S. Amateur Championship, Ball showed no signs of hesitation.

“You’ll definitely see me here next year,” he said.

Ball, who led the Rams in scoring average last year as a freshman, is one of four Rams starters returning to the team this season.