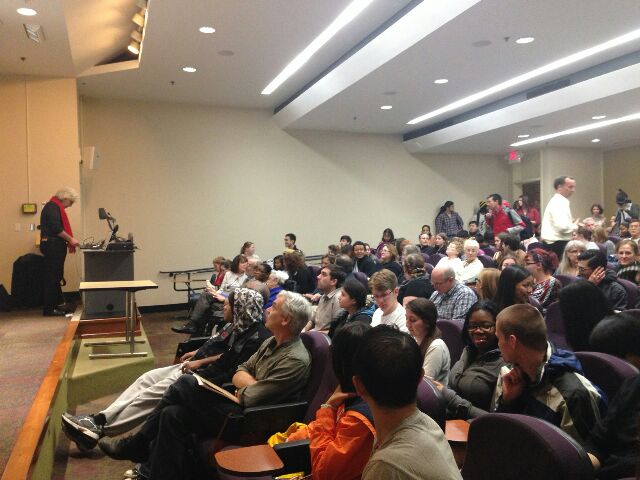 Independent artist Narcissus Quagliata visited VCU on Friday to display his work and speak about the similarities between art and science to a group of about 100 guests in a Temple lecture hall during the VCU Mathematics Colloquium.

Quagliata, an Italian artist, lectured and showed photos of his art around the world. His lecture titled “Science, Art, Light and Time” focused on the relationship between the sciences and art, including nature, the human body and light. Quagliata designs domed stained glass structures around the world.

“I think art comes from three places, she says, the mind, the heart and the gut,” Quagliata said quoting his daughter who is also an artist. “Most of my work comes from the gut.”

His dome above the Basilica in Rome, Italy allows people to look through and experience an eclipse of the moon with the naked eye and also illuminates rainbows along the walls and floors of the building.

“It wasn’t about the art, it was about the light,” Quagliata said. “If it wasn’t for the fact that I collaborated with a scientist … this would have been a disaster for me emotionally because the art failed in a way.”

Quagliata also designed a dome in the city of Kaohsiung, Taiwan, a structure more than 100 feet in diameter. He said sections of the dome, titled “Wind, Fire and Time,” represent the sea, femininity, life and conflict.

Mathematics professor Andrew Lewis has known Quagliata for almost 40 years and invited Quagliata to speak at the event.

“The math department established (this program) probably four or five years ago to bring distinguished people in to give broadly accessible talks,” Lewis said. “Our objective was of course to interest our own math majors but hopefully to broaden the audience beyond those who might ordinarily respond to the words of mathematics.”

Creative advertising major and junior Carmen Smith attended the lecture after her honors math professor told her about Quagliata.

“I thought it was very enlightening,” Smith said. “I make art generally and listening to him speak about his art (was) refreshing to hear that he’s thought through what it is that he does.”

While some artists ask viewers to interpret art individually, Smith said she liked the fact that Quagliata explained his purpose to his audience.

“You can still interpret (his work) yourself, but he has something that he wanted you to see,” Smith said. “(Students) should really check out his work.”