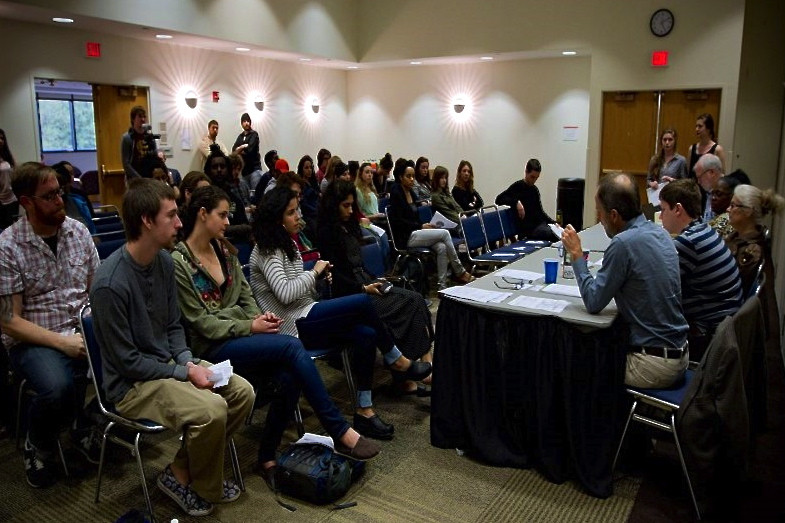 The Students for Social Action celebrated on Thursday, Feb. 6 the anniversary of the Living Wage Campaign, a project at VCU to build awareness for income inequity for VCU employees, particularly adjunct teachers and Aramark employees. Students participated in a panel forum in the Richmond Salons.

Five featured speakers, including VCU and University of Richmond professors, as well as Living Wage Campaign representatives from University of Virginia, participated in the discussion.

“The forum is to raise awareness for the conditions of the employees,” said Camila Borja, a senior international relations and gender and women’s studies major. “They are paid minimum wage and with the cost of living today, that’s not nearly enough to get by.”

Borja began the project at VCU last year and formed the VCU Living Wage campaign out of a research project in a religions class. The project turned into a campus-wide campaign focused on establishing a living wage for VCU employees.

“Its not just about making sure they are paid enough,” Borja said. “It’s about treating them like human beings instead of people who are here to serve us.”

The group has written letters to Richmond City Council, reached out to VCU administrators as well as held an unsanctioned workers appreciation day as part of their advocacy.

The campaign advocates to raise the employee wages to a living wage, which in Richmond is $10.39 per hour for a single adult and $20.43 per hour for an adult with children.

“So many of these employees have families they need to support,” said junior Nasiha Rashid, a Living Wage Campaign member. “We see them everyday yet fail to interact with them on a human to human level.”

Jennifer Garvin Sanchez, Ph.D., an adjunct religious studies instructor at VCU, said adjunct faculty make up 76 percent of university instructors in America, but do not earn a living wage or benefits.

“Its become a taboo to talk about salaries,” Sanchez said. “But we need to in order to understand how real the problem is. I work 30 hours a week and only make $18,000 a year.”

Sanchez said the lack of funding for adjunct faculty leads to a lower standard of education for the students.

“Universities run like a business where students are the products,” Sanchez said. “They build fancy buildings to attract students and the cost cuts our pay and raises student’s tuition.”