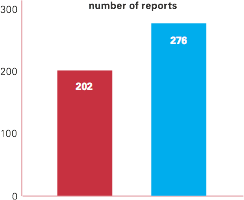 VCU saw a 37 percent increase in the number of complaints reported to the university Integrity and Compliance Office during fiscal year 2014.

Each filing is handled internally by VCU and reporters have the option to file anonymously. Overall, only 33 percent of the reports filed in FY 2014 were substantiated, meaning the ICO found violations of VCU policy or law had taken place.

Seventy-three percent of the 276 reports from FY 2014 fell under the human resources category which includes possible violations such as failure to report leave, employee misconduct, discrimination and harassment, sexual assault, bullying and nepotism.

The ICO found no violation or misconduct in 61 percent of human resources filings. There were also noted increases in the area of discrimination and harassment reports for FY 2014 accompanied by a 2 percent decrease in bullying.

The report states that increases can likely be attributed to improved awareness of reporting expectations and resources among faculty and students. 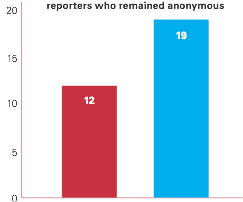 “In most cases, these allegations were due to a combination of employees being disciplined for inappropriate behaviors, for performance issues, and some instances of lack of respect and breakdowns in communication,” the report states.

The financial category of complaints had the second largest concentration of reported concerns at 12 percent of all reports.

Possible financial violations include fraud, misuse or abuse of resources, falsification of records and conflict of interest. In 70 percent of reports related to finances the ICO found no violation or misconduct.

Faculty members filed more than three of every four reports. Students reports comprised only 11 percent of filings. Seventy-eight percent of reports are filed by direct contact with compliance partners at the ICO.

When the ICO substantiates a report it is dealt with on a case-by-case basis regarding the issue at hand.

“Overall, the appropriate management function in the area determines final disciplinary actions,” states the VCU Duty to Report Policy. “This policy does not supersede any existing policies addressing employee discipline or due process afforded to employees.” 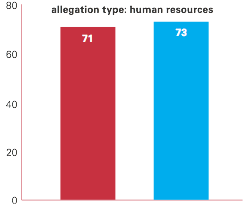 Furthermore, the federal government has implemented a pilot program to protect employees working on federal programs.

The initiative provides a list of appropriate channels for reporting concerns, which include members of Congress, an inspector general, a VCU employee responsible for investigating misconduct and other appropriate government channels. It does not protect whistleblowers who approach media outlets with information.

Susan Robb, senior associate vice president for research administration and compliance, said VCU would handle a whistleblower approaching the media the same as one who handled their case internally, however.

“We always try to protect any individuals reporting in good faith,” Robb said.

William Cole, executive director of VCU assurance services, said that the university prefers to handle reports of misconduct internally, but the federal program provides a last resort for individuals receiving federal funding who are not satisfied with the results of ICO investigation.

“The first thing you should do before going to the federal whistleblower program is try and work it out with your own institution,” Cole said.

Cole is not aware of any cases at VCU where reporters utilized the  program.