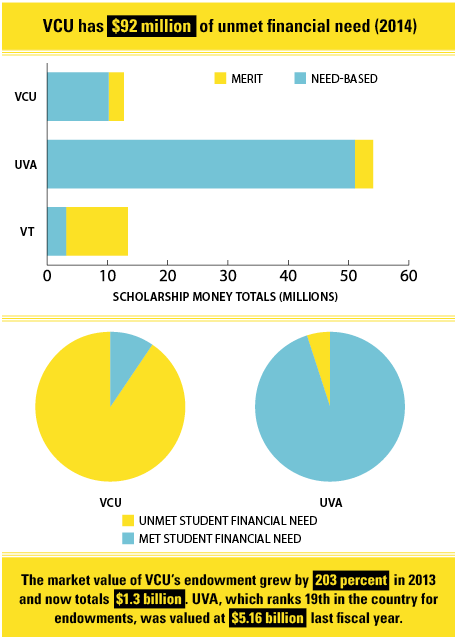 VCU has insufficient funds to put towards financial aid and has the highest number of students in-need out of any state university in Virginia.

There have been recent increases in the amount of money VCU can give out in scholarships, but they do not come close to covering the colossal unmet need. $600,000 has been allotted to help recruit out-of-state students which will be a mix of need- and merit-based money; $500,000 is allotted to one-time funding to help deal with tuition increases; $1.29 million is dedicated to need-based scholarships and was reallocated from residential life and an additional $350,000 will be put towards merit-based funding.

“We don’t have significant endowments,” said Luke Schultheis the vice provost heading up the division of strategic enrollment management. “These other schools, like U.Va., have really deep wells of money.”

Brenda Burke, the director of the division of strategic management, said that the university is unable to spend the endowment revenue because there would not be remaining funds for following years. Instead VCU spends the interest that accumulates on the endowment each year.

More recipients of Pell Grants, a federal program which provides need-based aid to undergraduate college students, come to VCU than any other state university. The problem the university faces arises with students who do not meet the requirement for Pell, but are still considered in-need.

“There are some studies going out right now that the State Council (of Higher Education for Virginia) has done that show you can have $80,000 of income and still be considered low to middle class,” Burke said. “Depending on where you live and family size that might not be enough.”

“It hampers us significantly,” Schultheis said. “Our philosophy is to make it as affordable for as many people as possible. Instead of fully funding a couple students we will partially fund five or six students.”

“I would guess they’re trying to attract talent,” Schultheis said. “We would be trying to do the same if we had unlimited resources.”

In contrast a university like U.Va., which gave $51 million in need-based and $3.05 million in merit-based scholarships, does not have trouble attracting talent.

“Its one of those school that if you get in you’re going to go,” Schultheis said. “And they’re going to help you out.”

Aside from scholarships, VCU offers a number of other ways to help students through college. A small number of work-study options are available and campus employment and loans are always options.

The university has also implemented a new program, SALT, which helps students with financial planning. It aids in budgeting, finding the right amount to borrow to pay for university and it is available to students for three years after graduation.