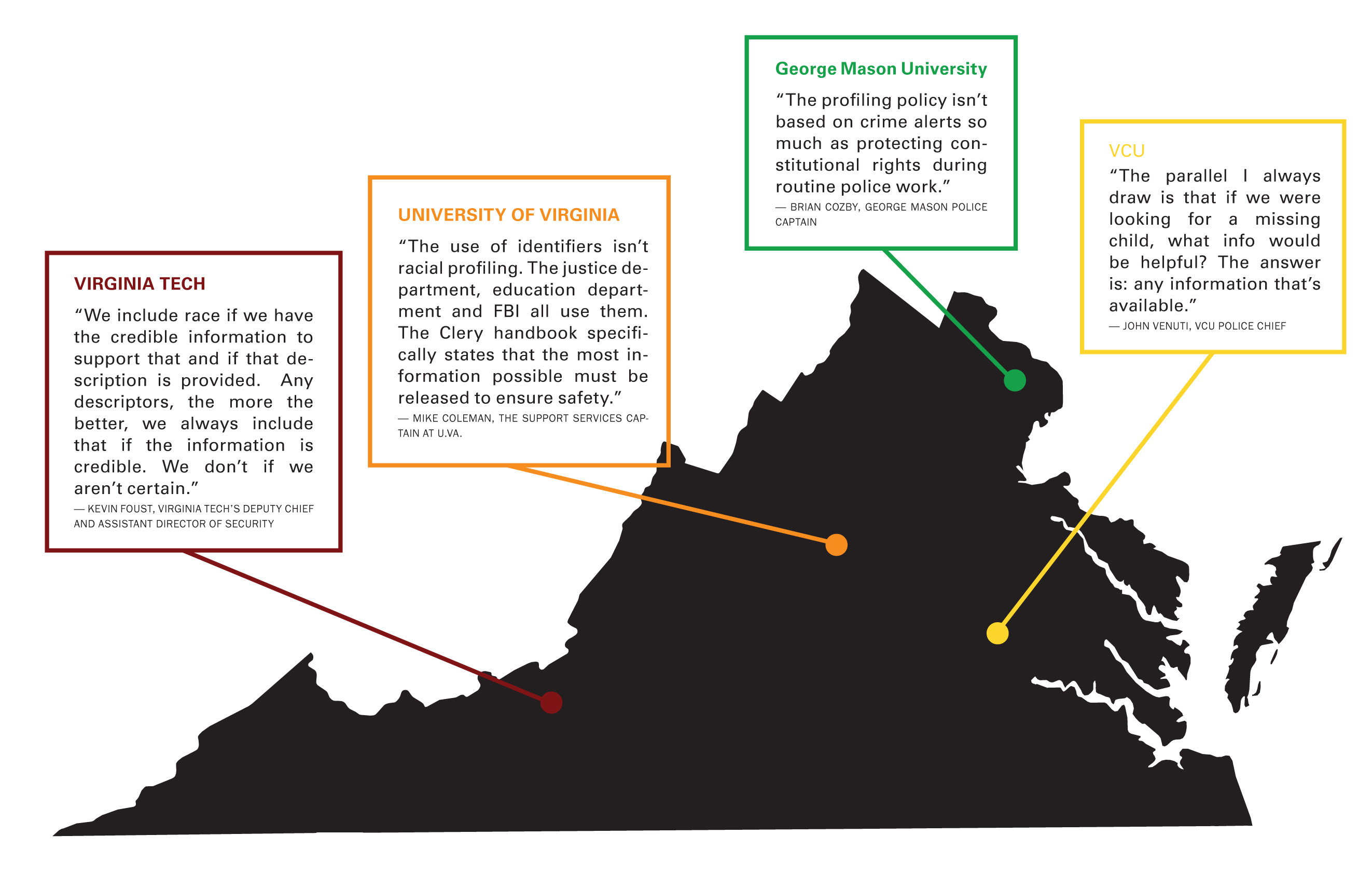 Earlier this month, a panel discussion explored whether the use of racial identifiers in VCU crime alerts leads to racial profiling on campus, and if the tactic is effective in catching criminals or warning the community of an ongoing threat.

Outside of Richmond, other Virginia universities use similar tactics when issuing crime alerts for Clery crimes. Kevin Foust, Virginia Tech’s deputy chief and assistant director of security,  said the university will include a suspect’s race in its crime alerts. Virginia Tech does not have an official policy on racial profiling, Foust said.  He said crime rates are different in urban settings; the most common crime at Virginia Tech is theft of personal belongings.

“We include race if we have the credible information to support that and if that description is provided.  Any descriptors, the more the better, we always include that if the information is credible. We don’t if we aren’t certain,” Foust said.

Although Virginia Tech does not have a formal policy in regard to racial profiling or crime alerts, University of Virginia and George Mason University both have policing policies to dissuade their officers from using unethical policing tactics.

“The use of identifiers isn’t racial profiling. The justice department, education department and FBI all use them. The Clery handbook specifically states that the most information possible must be released to ensure safety,” said Mike Coleman, the support services captain at U.Va.

Coleman did mention that U.Va. has an anti-discriminatory education policy that is a requirement during their police force training, but that does not factor into their use of “identifiers” when sending out alerts.  Coleman said he was uncertain of how often the university sends out alerts.

Much like the anti-discriminatory act employed at U.Va., the George Mason police abide by a bias-based profiling policy for officers. This training occurs biannually and is meant to ensure that ethical policing is taking place.

“This isn’t necessarily in regard to Clery, but more to ensure that our officers aren’t impeding on individual’s rights in our community,” said George Mason police captain Brian Cozby. “The profiling policy isn’t based on crime alerts so much as protecting constitutional rights during routine police work.”

Cozby said the measure was adopted in 2001 and last amended in 2009. He also added the GMU police  include every possible descriptor in their crime alerts in an effort to have as many people on the look-out as possible. He said there has not been a crime alert issued in the last month.

Kevin Harris, vice president of Student Health, and a member of the group researching the implications of the alerts at VCU, said he thinks they have a pontentialy negative effect on how African American students see themselves on campus.

“I think there’s some marginalization taking place with African American males who are socialized from very early that they will probably have different treatment,” Harris said in an interview last month.

“If this can demonstrate that this one descriptor of a person is actually leading to solving crime, I’d be willing to pull back and be less offended,” Harris said.

VCU Police chief John Venuti said in a prior interview the police include every descriptor they have of a subject when issuing crime alerts to the community to ensure safety.

“The parallel I always draw is that if we were looking for a missing child, what info would be helpful? The answer is: any information that’s available,” Venuti said in a prior interview.