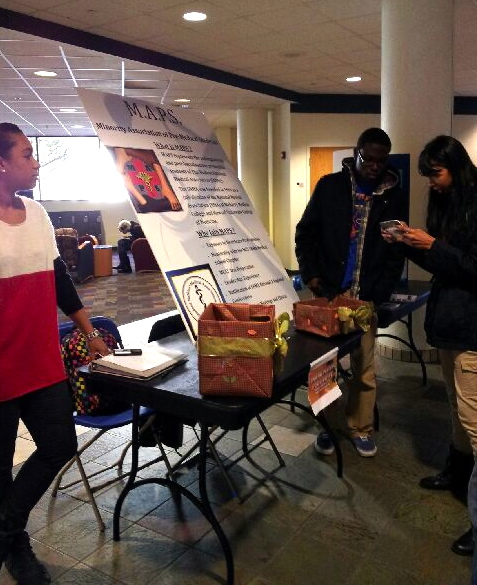 “We’re just collecting any extra food that people have for the people (in Central Virginia),”

said senior biology major Miriam Robertson. Robertson, the president of MAPS said it was her idea to get the group involved with FeedMore.

After they finish the food drive on Monday, they will give what was collected to FeedMore who will then distribute the goods to those who need it.

MAPS aims to collect between 30 to 40 cans before the end of their drive on Monday, Nov. 25. Although they only received seven cans on their first day of collecting, Robertson said they are hoping for a better turnout Monday.

FeedMore is an organization devoted to hunger relief in the central Virginia area. It includes Central Virginia Food Bank, Community Kitchen and Meals on Wheels Serving Central Virginia. Donors are encouraged to give items that are “urgently needed” such as peanut butter, canned tuna, salmon, chicken, ham, canned fruits, canned vegetables, hot and cold cereals, pasta and rice, according to FeedMore’s website.

Though MAPS is geared towards health, Robertson said the organization also hopes to do a

range of things for the community in the future. In addition to more food drives, the groups also plan to volunteer at local shelters.

Sophomore psychology major Ronston Jackman is the complex event planner of MAPS. He and Robertson both collected the cans Wednesday and informed other students on how to get involved with MAPS.

Jackman said the organization allows students to gain experience in their field and also offers many volunteer opportunities such as the canned food drive.