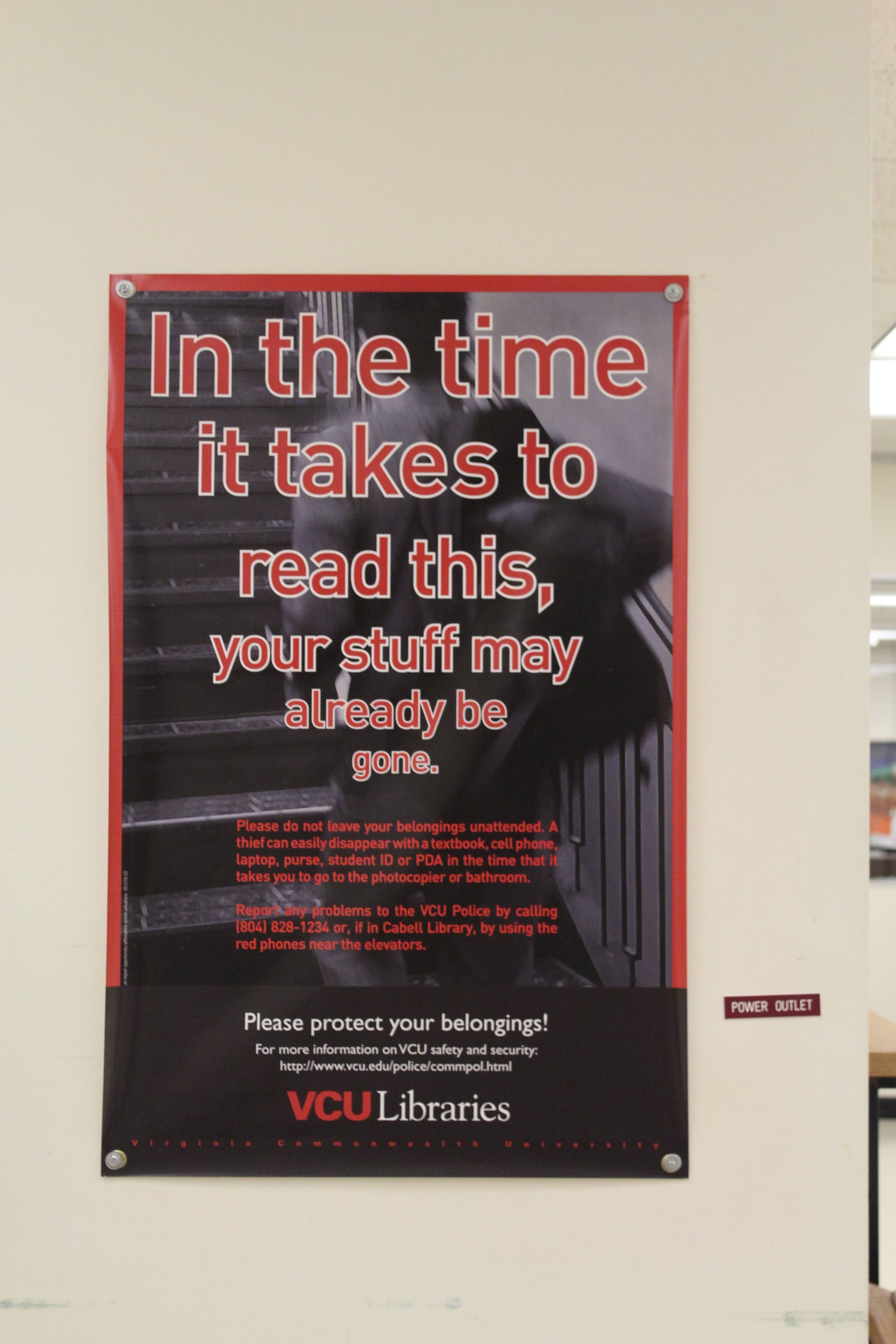 Overall theft at VCU has decreased over the past academic year. However, the VCU Police Department has noticed a spike in one specific area of theft; electronic devices.

“We have seen a 9 percent decrease in theft over the past academic year, but electronic device theft has increased 22 percent over that same stretch of time,” said Captain Mike O’Berry of the VCU PD.

“I had a lot of things stolen … I finally called the police when I realized  I had money directly stolen out of my wallet,” Douglas said.

Graduate Caitlyn Botts had a similar experience in 2012 when she lived at Grace and Harrison streets. She walked to her car one afternoon and found all of her belongings missing.

“My car was broken into on campus and they took my iPod, my sunglasses and my friend’s purse that was under my passenger seat,” Botts said.

Cell phones, tablets, iPods and even laptops are among the items frequently stolen from students O’Berry said.

“These are usually cases of people leaving their things unattended or out in the open for even just a few minutes. These items can be pawned off for quick cash at a number of different stores,” he said.

O’Berry also said thefts most often occur while students are getting their workout on.

“The Cary Street Gym is where the most thefts happen. It can be due to user error when securing a locker, or just setting your stuff down when working out and not paying attention,” O’Berry said.  “I’ve also seen on several occasions dozens of sets of keys and phones placed on the windowsills in the basketball courts. That is pretty risky.”

Not all thefts are preventable, but there are things students can do the help themselves, O’Berry said.

“You can register your laptops with us. It is also important to keep records of your serial numbers so if something gets taken, it can be tracked,” he said. “If you have an iPhone or iPad, it is also very important to download the app that allows you to track the location of your phone.”

Botts said she lost hope and did not contact the police after unsuccessfully trying to find her iPod with a tracking app.

“I tried to track my iPod on the find my iPod app, but the thief never turned it back on. I figured there was no way the police would find all my stuff or who did it,” Botts said. “I had to skip class because I was so sad. I had just gotten that iPod.”

“I never got my items back, but I have a good hunch on who stole them. I was just truly overwhelmed because finals week was approaching,” Douglas said.

O’Brien said he doesn’t see the trend of electronic device theft changing until students start taking control of their possessions. However, he did say the VCU PD is using new technology to help solve cases.

“We have seen a lot of success with the new cameras on campus,” O’Berry said. “Some of them have night vision, so our overall level of visibility has increased at all times of the day.”