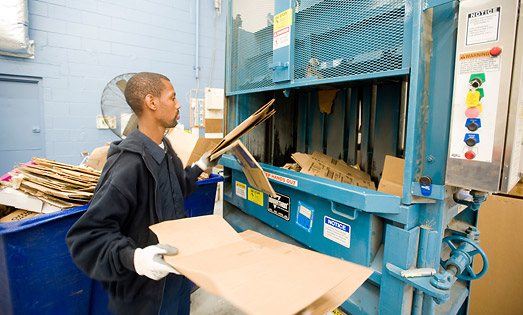 VCU’s Office of Sustainability is continuing its efforts to implement green initiatives on  campus. In particular, the management of the university’s waste.

Since December 2012, a core project team has implemented a single stream recycling process campus-wide. Completion of all buildings on both campuses is expected before the end of the year.

“We are seeking to mainstream everything into single containers,” she said.

Between 2011 and 2012, prior to the implementation of single-stream recycling, the library’s average recycling rate was 7 percent. After implementing the new recycling method, the rate improved to over 44 percent as of July 2013.

In the past, all recyclables required separation into different and multiple containers, which was counter productive because it complicated the recycling process and was less effective in capturing the majority of recycled materials that ended up in the trash containers, Starbuck said.

In correlation to the surrounding Richmond area, sustainability efforts have increased. The city was recognized for the Virginia Municipal League’s 2009 Green Government Challenge award for its green efforts, according to the City of Richmond website.

However, there has been difficulty in enforcing new sustainability programs. Time demands, education and difficulty of changing behaviors all create problems with new recycling habits,  Starbuck said.

This aligns with the OS “Zero Waste” program, in which the essential mission is to promote a less wasteful community.

“We must be more mindful of what it takes to make and to dispose of various items,” Starbuck said. “As our population increases, waste will continue to compile and will pose disastrous effects on our environment.”

To further promote VCU’s green efforts, the Office of Sustainability will hold its annual “Campus Sustainability Day” on October 11th in the Student Commons between 10 a.m. and 2 p.m.

During this event, OS representatives will educate students and faculty of the green projects that are already in place at the university, such as solar panel ceilings and botanical gardens. The representatives will also discuss future green methods set to be implemented soon.

In addition, the OS conducts free Segway tours to highlight the green facilities plotted around campus. All of the green projects are part of a bigger, university-wide goal, Starbuck said. By 2050, VCU hopes to become completely climate-neutral.