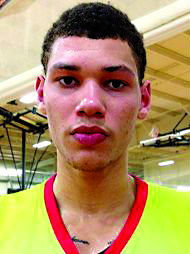 Yet another four-star recruit has committed to the VCU men’s basketball team.

Senior Michael Gilmore of James S. Rickards High School  in Tallahassee, Fla. gave his verbal commitment to the Rams last week.  He is the fourth four-star recruit who plans to suit up for the Rams in 2014-15, and the third to commit in September.

ESPN ranks Gilmore as the 76th player nationally in the 2014 class and 5th best in the state of Florida. The 6-foot-9 forward is known for his polished inside game and smooth outside jumper, which will help fill a void left by two senior big men who graduate at the end of the upcoming season. The Rams will lose transfer Terrance Shannon and projected NBA first-round draft pick Juvonte Reddic.

Gilmore will not have to worry about wreaking havoc alone during his career with the black and gold. The first recruit of the 2014 class came in spring from point guard Jonathan Williams of St. Benedict’s Prep Newark, N.J.

Williams is rated as the 4th best player in New Jersey by ESPN. His knack for getting into the lane and his playmaking abilities are sure to strengthen the Rams’ backcourt.

Justin Tillman, a 6-foot-8 big man from Pershing High School in Redford, Mich. committed  in early September. He begins his senior season ranked 5th in the state of Michigan, according to ESPN. The Detroit-area native is a perfect fit for Shaka Smart’s system. His length and athleticism will make him an invaluable piece during close games.

Larrier has the mix of size, offensive skill and upside that college coaches drool over. His jump shot and slashing ability will make him a weapon on the offensive end.

The 2014 VCU recruiting class is ranked 15th in the nation, according to ESPN. That’s above traditional powerhouse programs like Arizona and Louisville, which last year won the NCAA Tournament. Many sports journalists believe VCU will finish the year comfortably in the top-10 because all four of its commitments come from high school players whose stock are rising.

All four players are expected to make their current verbal commitments official for the 2014-15 season during National Letter of Intent signing week from Nov. 13-20.