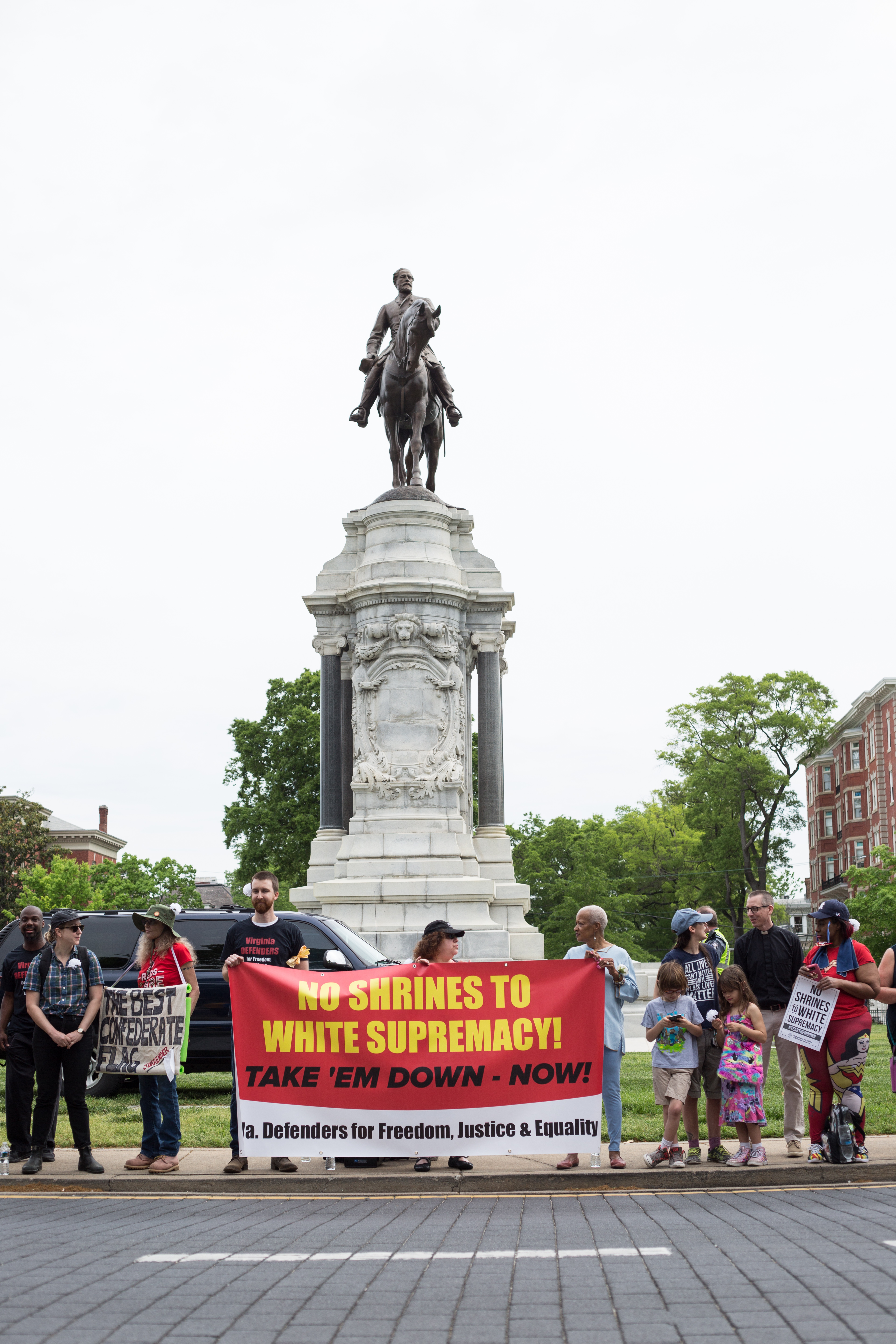 RICHMOND – Fewer than 10 members of a pro-Confederate group were outnumbered by several dozen counterprotesters at a rally at the Robert E. Lee statue on Monument Avenue on Saturday.

It was the third time the group, called CSA II: The New Confederate States of America, has rallied in support of the statues commemorating Confederate figures in Richmond. The Tennessee-based group’s previous appearances have drawn a sizeable presence of local and state police and counterdemonstrators – and Saturday’s rally was no exception.

Virginia Defenders for Freedom, Justice & Equality held a rally adjacent to where the CSA II group held theirs. The events did not provide much in terms of spectacle, but there were a few tense moments, including a shouting match when a person passed near the pro-Confederate demonstrators with a sign that read “Robert E. Lee was a loser.”

Several people with the Tennessee-based group are here hanging out and listening to rock music. pic.twitter.com/w7Bitew9sT

Several hours later, a counterprotester stomping on an American flag drew the ire of some pro-Confederate demonstrators, who began yelling at their counterparts across the street.

Joseph Rodgers, a resident of Richmond’s East End, addressed those who gathered to protest against the pro-Confederate group, saying the statues represent the worst values in America.

“I’m not saying these monuments are the problem, but we are saying that they are a symptom of the problem,” Rodgers said. “The very minimum we can do is to remove shrines of racism and hatred from public property.”

Lisa Leichssenring, a Ruther Glen resident, said the statues send a message that Richmond is not a city for all people.

“It’s a slap in the face for people of color to see those people memorialized,” Leichssenring said.

Civil War re-enactor Jim Callear, a Powhatan resident, was with the pro-Confederate group. He said he disagrees with the notion that the statues are racist. They represent a piece of American history, Callear said.

“It would be a slap in the face to history. When you put up something as a memory of what happened in a war, you have to leave it, whether you like it or not,” Callear said. “If you forget about history, you’re doomed to relive it.”

The conversation surrounding the statues memorializing Confederate leaders has been contentious around the country for several years. It reached a flashpoint at last summer’s “Unite the Right” rally in Charlottesville, in which a counterprotester was killed in a car attack.

In Richmond, Mayor Levar Stoney appointed a commission to recommend what to do with the five statues of Confederate figures on Monument Avenue. Stoney originally said the commission would look for ways to add context to the statues. But after the demonstration in Charlottesville, the mayor broadened the panel’s scope to include considering removal of the monuments.

Someone just ripped an American flag and police had already started lining up with other small disagreements. pic.twitter.com/shogBunmZI

Speaking to a crowd of more than 60 protesters, Rodgers said no addition could justify the existence of the monuments, considering the context of their construction. According to the registration form to add the statue to the National Park Service’s registry of historic places, the Robert E. Lee monument was erected in 1887 to commemorate the Civil War general and “herald the emergence of a New South from the adversity of defeat and reconstruction.”

“This is the context in which the Monument Avenue Commission has been tasked to see if they can find a way of adding to that story,” Rodgers said. “I don’t see how you contextualize that by keeping (Confederate statues) in place.”

But Ron Bell, a Prince George County resident, said he sees no reason to take down statues. He doesn’t believe that doing so would do anything to combat racism.

“Tearing down monuments will not ever change anything that happened 150 years ago,” Bell said. “Let’s say the monument comes down, then what’s next?”

Bell said he found out last year that he is a distant relative of Robert E. Lee. For that reason, he said, the statue holds unique importance to him and represents his heritage. It’s why he said he decided to show support for keeping it up.

The Monument Avenue Commission will hold public meetings from 6 to 8:30 p.m. on Thursday at the Richmond Public Library and from 10 a.m. to 12:30 p.m.on May 19 at Martin Luther King Jr. Middle School. The commission will review comments from members of the community at the events, according to a news release.

Processing...
Thank you! Your subscription has been confirmed. You'll hear from us soon.
Loading Comments...