A major factor in rising college tuition is the increased spending on instructional support, which include costs such as libraries and academic administration, a new report from the Virginia Joint Legislative Audit and Review Commission concluded.

In a three-year period ending in 2013 VCU saw professional faculty (advisors, coaches, managers and directors) increase from 374 to 570 — a 52 percent increase. Administrative faculty (deans, provosts and the president) decreased in number from 208 to 194 people — a 6.7 percent decrease. 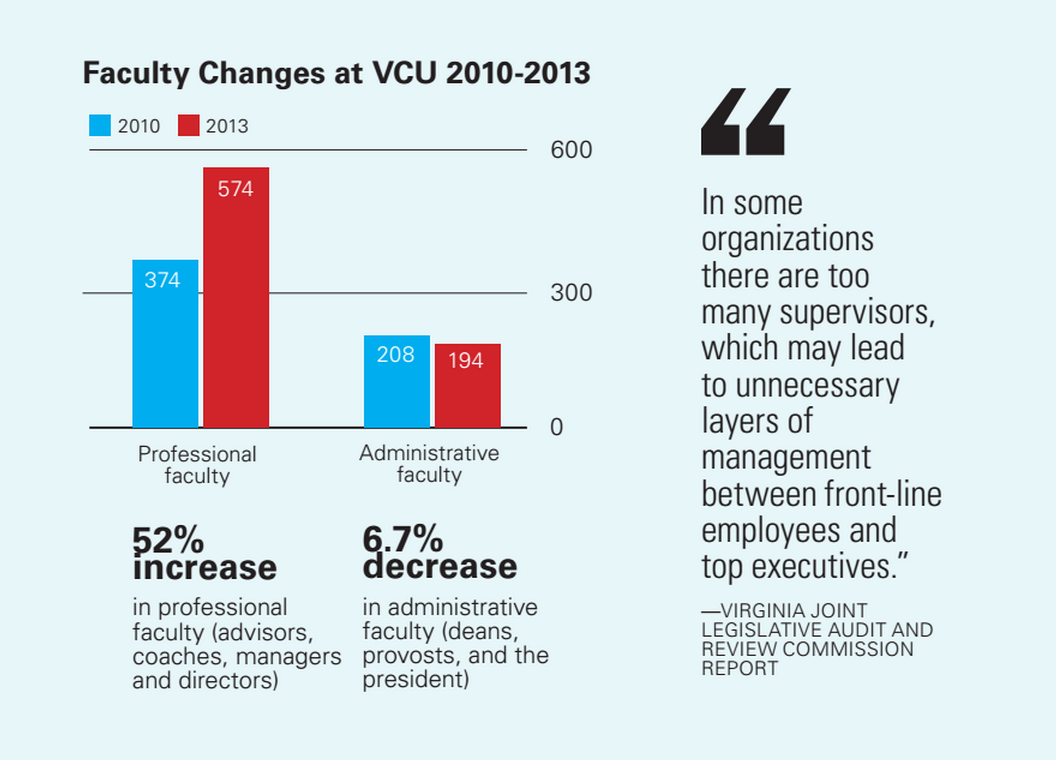 Many of the positions VCU lists as professional faculty are considered to be instructional support by the JLARC report. This fact has caused VCU to say the comparisons and recommendations made in the report are baseless, as stated in VCU’s response to the report.

“VCU does not maintain data in the way JLARC staff needed it for their analysis,” said Bill Decatur, Senior Vice President of Finance and Administration at VCU in a statement to the director of JLARC, Hal E. Greer.

In their report JLARC found that VCU is one of four Virginia state universities that employs fewer support staff than comparable national peers; VCU’s institutional support staff numbers 2.8 per 100 students.

In the entire state of Virginia this support spending is one in every five dollars of total spending: $1.2 billion in FY 2012.

“In some organizations, there are too many supervisors, which may lead to unnecessary layers of management between front-line employees and top executives. These layers can slow decision making and unnecessarily increase costs,” the report reads.

In all of the Virginia universities JLARC found that the span of the control (number of subordinates a supervisor has) is below what is considered acceptable. The average supervisor at VCU has about four subordinates. Almost 30 percent of supervisors at VCU have only one subordinate. Virginia institutions cite complexity of work and rising compensation pressure for the large number of supervisors.

Universities outside of Virginia that have made an effort to increase their span of control have reported yearly savings from $3.2 to $20 million depending on the size of the school.

JLARC recommends the Board of Visitors at Virginia schools to review the organizational structure and implement regular reports on the average span of control. It also recommends that staff at these institutions change their human resources policies to eliminate access to supervisor positions.

Decatur said that implementing these changes would “do more harm than good.” Decatur said that what JLARC considers to be an ideal span of control does not apply to it’s management and that the university is actually understaffed.

“The result isn’t that VCU has too many managers, but rather that we have too few workers,” he said.

He explained that due to budget cuts, VCU has been forced to let go of workers, thus leaving fewer subordinated under supervisors. He provided one example of a manager who had seven people working under them, but now just two.

Decatur continued by saying that if the board begins setting standards on the span of control it will take a considerable amount of management power away from the school president. He said that under Virginia state law, the board appoints the president to take care of day-to-day operations.

Not all of these positions are unnecessary. They help to guide the university toward its academic goals by providing services to students and faculty. Kathleen K. Shaw, Vice Provost for Planning and Decision Support, said that many of the new positions were student services positions such as advisors.

Shaw said she is confident the mission of the university is being fulfilled. When student success indicators are taken into account they show improvement: Retention rate, graduation rate and scores of student satisfaction have all gone up.

Regardless, the JLARC report’s purpose was to “identify opportunities to reduce costs” and it identifies support costs as rising 23 percent (adjusted for inflation and enrollment) between 1991 and 2010.

VCU’s total support spending is one of three Virginia state institution to have decreased relative to enrollment between 2000 and 2010 — a 16 percent decrease. The report cites VCU’s reasoning behind the decrease as enrollment outpacing support spending.

“Institutions outside of (Virginia) have decreased the number of administrators and have been able to reduce operating cost .5 to 1 percent. If Virginia would do this then they would save several hundred dollars per student per year,” the study reads.

Along with support staffing costs the study also recommended that schools streamline the procurement of resources. VCU has already adopted all of these recommendations except for one: formal management of the supply chain on an ongoing basis.

“To be competitive and fiscally responsible, higher education institutions must have the flexibility to select the procurement method that most favorably drives costs down and favorably supports the fundamental mission of the institution,” Decatur said.

If VCU were to accept the recommendations of the JLARC report Decatur claimed that local business will benefit less from the university because of contracts and the constraints they come with.