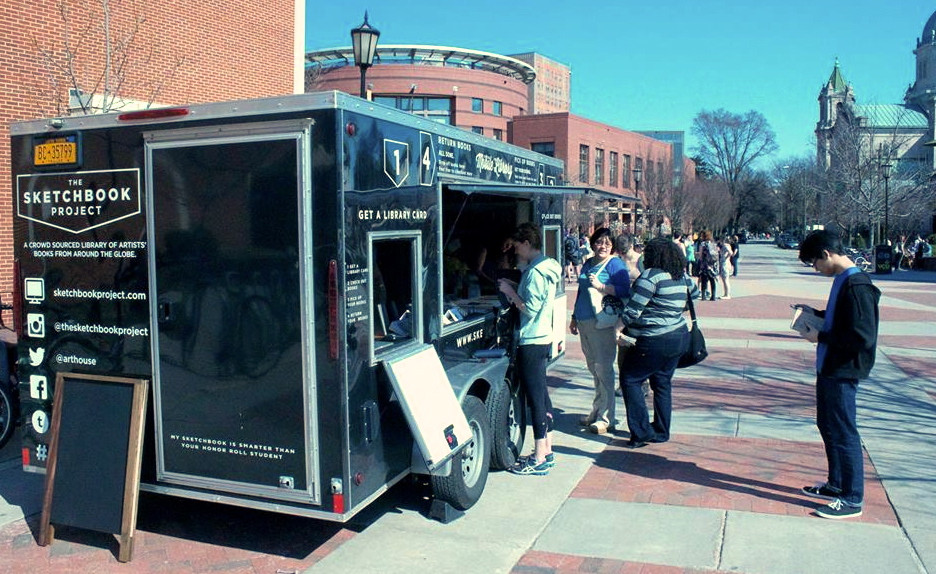 Students were able to contribute to the world’s largest collection of sketchbooks in the Compass on Friday afternoon.

The Sketchbook Project, a traveling art exhibit, holds a library of art with work sent in from individuals from all over the world and offers anyone the chance to add to their collection of 30,000 books.

“There may be 30,000 books but for us it’s not about any one individual book, it’s about the collection as a whole,” said Jessica Sugarman, assistant director of The Sketchbook Project.

The Sketchbook Project was just in Richmond for the day, and will be traveling to Asheville, N.C. next.

“It was a really cool diverse thing and they were all different,” said Kelly McCray, a junior English major. “This is awesome and now I want to draw.”

After debuting in Atlanta in 2006, The Sketchbook Project used to mail the sketchbooks back to the artists after they were displayed in the traveling exhibit. In 2009, the group moved to Brooklyn and started a permanent and growing collection, according to Sugerman.

Books are organized by theme, mood and material. Sugarman said there are not just drawings in the books, but poetry, collages and pop-up art that can be found between the bindings

The mobile library places doodles by elementary school children next to illustrations by professional designers.

Lance Oldham came to Richmond from Greensboro, N.C. for The Sketchbook Project. When his wife gave him one of the project’s books to fill up as a gift, he carefully considered what he wanted to draw after getting his book in May of this year.

“I did a life story through albums that made an impact on me. I started with the first album I bought and went up to the most recent album that had an impact on me,” Oldham said.

This was the second time The Sketchbook Project has been exhibited at VCU.

“The first time we were here it was raining and not very many people were able to make it out,” Sugarman said.