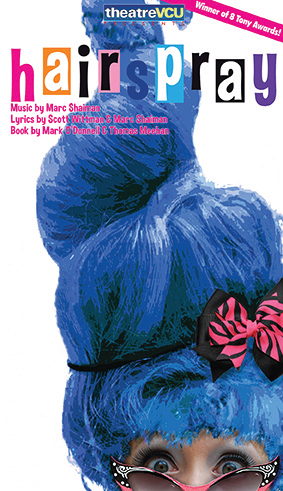 “Hairspray” will grace the VCU Mainstage theatre starting Nov. 8. The Broadway-favorite has won best musical and eight Tony awards.  The VCU production will run until Nov. 24.

The musical tells the story of Tracy Turnblad, a heavy-set teenager living in Baltimore who lands a spot on a hit local dancing television program in 1962. The musical tackles the issue of segregation through dance, song, big hair and costumes.

“It’s been awesome, I love this cast,” said Patti D’Beck, the director of the production. “They’re a really good, hard working cast, they’re creative, they come up with great ideas and things they’ve worked on, and I’m having a great time.”

D’Beck is a Broadway veteran and has choreographed a variety of numbers, including Rosie O’Donnell’s 1997 Tony Awards performance. She has worked with several Broadway directors as well as directed and choreographed several VCU Mainstage performances. Her assessment of the play’s difficulty is echoed by the play’s leads.

“This is probably one of the hardest shows we’ve ever put on at VCU — it’s a monster,” said Max Ehrlich, a theatre performance major who plays the lead of Lynk Larkin. “It’s the biggest show we’ve ever done.”

Larkin is the teenage heartthrob who stars on the TV dancing program Turnblad auditions for.  Turnblad originally lusts over him, and their relationship twists and turns throughout the show.

“We have a huge cast, the dancing is super grueling, the level is difficulty is definitely a notch up,” Ehrlich said. “And not only is the singing harder because there are so many more people that have to hit the harmony … but the dancing is probably one of the hardest dance shows you can do.”

Ehrlich and his co-star Blair Wingfield, who plays Turnblad, both said just because the show is a musical doesn’t mean that it doesn’t have a serious undertone.

“The show tackles a really important issue, which is segregation and integration, and it has its cheesy and fluffy moments but it comes from truth,” said Wingfield, also a theatre performance major.

Wingfield emphasized that the story is something everyone can learn from.

“It really teaches self-worth and acceptance, not just on race, but on body types and images,” she said.

The two-month long rehearsal process typically takes up about 30 hours per week, and auditions for the November show took place last April. All theatre performance majors are required to audition, though the cast of Hairspray also includes dance, English and education majors.

“Usually with big dance shows you have your dancers and your singers, whereas here you have to be able to tackle both really, really well,” Wingfield said. “We’re getting our gym time in because we don’t have time to go to the gym anyway.”

D’Beck said the show incorporates dance numbers which utilize almost the entire cast, and the actors are required to sing and dance simultaneously for long periods without breaks.

“It really is grueling work,” Ehrlich said. “Like when we’re performing ‘You Can’t Stop the Beat,’ by the end of the first half of that song we’re already out of breath — you can’t stop the dancing — you can’t stop to breathe.”

This Mainstage performance is also unique because it includes graduate students in principal roles within the show.

“It’s really cool because they’ve worked in the outside world and have that experience,” Ehrlich said. “We get to share that knowledge that they’ve had in the real world, so it’s super beneficial to work with them.”

Tickets are on sale at the box office located on the first floor of the W.E. Singleton Center for the Performing Arts. They are also available online at www.showclix.com. Tickets cost $10 for students with a valid VCU ID, $15 for other college students and $25 for general admission.

“We have a lot of fun rehearsing and doing this show, so we guarantee the audience will enjoy it,” Ehrlich said. “It’s really great when you have people who don’t usually come out and opens their eyes in some way, that’s our job as actors is to speak to someone in an unexpected way and to move them.”