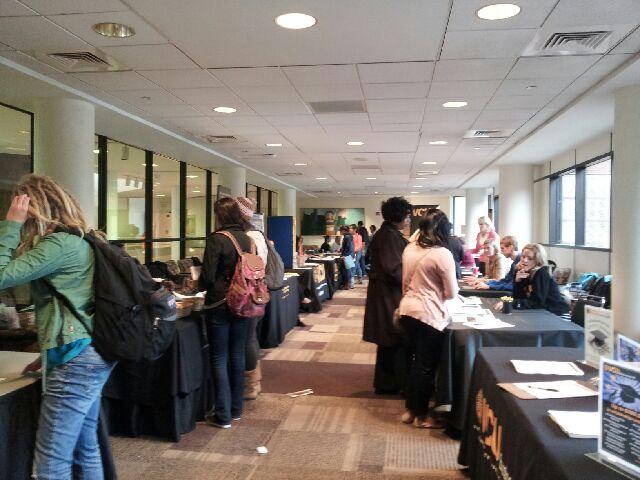 The VCU club Scholarship Sharing held the university’s first scholarship fair in the Richmond Salons of the Commons on Wednesday afternoon to educate students on the scholarships available to students.

“It is amazing! We had almost every foundation show up,” she said.

Scholarship Sharing began when SantaLucia and her friends accidentally made public a Facebook group intended to share and discuss different scholarship opportunities. Through multiple phone calls and assistance of VCU’s event planning office, SantaLucia and other members were able to create the two-day fair.

Mitchell said that offering a diverse selection was important for students. Mitchell also presented her own scholarship, “Teens Without 2.”

“It my first opportunity to talk about my non-profit for teens that come from single-parent households,” Mitchell said.

“People helped me, so I wanted to give back to someone else in need,” she said.

Mitchell said she is currently raising money and speaking with donors to make the scholarship as large as possible.

VCU’s National Scholarship office worked to bring information to students at the event as well.

“Our goal is to get VCU students to aspire to things that they wouldn’t otherwise,” said Jeff Wing, director of the National Scholarship Office.

VCU also offers more than 300 scholarships created by donors through different schools of the university, said Anne Hoffler, the director of donor relations at VCU.

Each school attended the scholarship fair in order to allow students to know what they offered and how to get to each scholarship through their webpages.

“I don’t know if students know how many scholarships are available,” Hoffler said. “I would encourage students to look for all sources.”