The People’s Library, a project funded by a VCUarts grant, opened earlier this month in the main branch of Richmond Public Library.

Co-directors Courtney Bowles and Mark Strandquist joined forces with the Richmond Public Library to install books made from repurposed materials. The books may be checked out, written in, and returned to be part of the library’s permanent collection.

Strandquist and Bowles worked in collaboration with Riley Duncan, a sculpture major, and Hope Ginsburg, a faculty adviser. The team funded the project with $5,000 from a 2012-13 VCUarts undergraduate research grant.

Bowles said the majority of the grant went to materials for making the books and bookshelf and leading the community workshops. Duncan worked with Richmond woodworker Jeremy Munn to build a circular bookshelf encasing the handmade books to preserve the personal histories of Richmond.

“We look at the project as a monument,” Strandquist said. “But not obviously one that’s of stone or with a hero on it but that is constantly in flux, that took hundreds of people to build and that will take hundreds more to complete.”

In January of this year, Strandquist said he proposed the idea to Patty Parks, library community services manager, and Natasha Payne, young adult librarian, at the public library. Both Bowles and Strandquist said their support and enthusiasm was vital in bringing the idea to fruition. Parks said she’s always eager for fresh ways to engage the community.

In February, after they received the library’s permission and the VCUarts grant, Bowles and Strandquist began leading community workshops to teach volunteers how to make homemade paper from discarded books. The workshops were held twice a week, free of charge.

Among these contributors were a group of teenagers who volunteered through a program at the public library led by Payne, VCUarts graduate herself. Strandquist said the teenagers were present at almost every workshop, making paper, binding books and teaching others how to do the same. 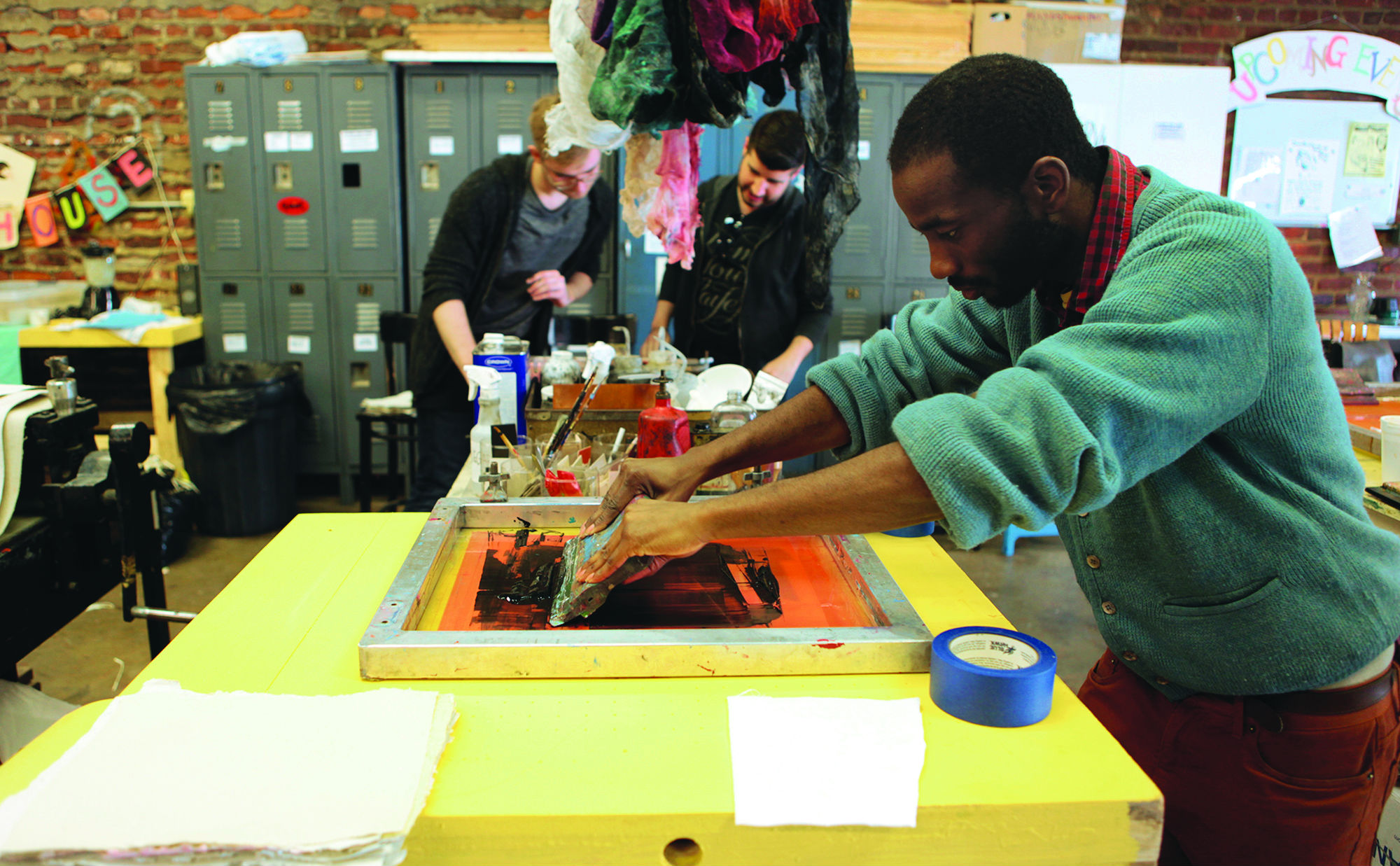 Each page takes between two and three minutes to make; each book consists of five pages and 300 books are available on the People’s Library’s bookshelf. Bowles said hundreds of people have been involved in the book-making process.

The librarians helped the team conceive a system of call numbers and cataloguing, which Bowles said is one of the most exciting aspects of the project.

“One of my favorite parts about it … is the way people will be able to represent the stories themselves,” Bowles said.

After someone fills a book with their personal history, they have the option of filling out an authorship label with their name and keywords that have to do with their histories. The keywords will go into the database where they can then be cross-referenced with any other book in the library pertaining to the theme.

“It allows you to not only define how your history fits in the collection, but also allows for it to be cross-referenced and create these interesting inner connections between your history and other histories that are within the library,” Strandquist said.

Both Bowles and Strandquist said the exchange of stories and experiences has informed their personal histories.

Bowles is an archaeologist and a Richmond native. After living in Church Hill for a decade, she said she was inspired by the stories of her neighbors who have been living there for 50 years or more.

Strandquist, a film and sociology graduate, moved to Richmond from Washington, D.C., where he worked with senior citizens in varying socioeconomic situations.

“It was, for a teenager, a really eye-opening experience, you know, what happens when our stories aren’t recorded, how we learn from these histories if they’re not public,” Strandquist said. “That sort of rattled my brain a lot and influenced most of the work I’ve done since then.”

After the two met at VCU, Bowles and Strandquist collaborated on a project called “Write Home Soon.” Installed at the Art Museum of the Americas in Washington D.C., the display questioned the nature of monuments and the limited stories they tell.

The concept for the People’s Library extended from grappling with these issues in relation to Richmond’s unique history, Strandquist said.

“(Courtney) and I were having a lot of conversations about well, what histories are championed here? What histories are public? And we thought and felt, and still do, that it’s a pretty singular reading of Richmond’s history, which is such an amazing, diverse and complex and contradictory history,” Strandquist said. “And so we were trying to figure out … how could we create a project that created space for all of our histories, but that did it in a way that was sustainable, collective, evolving?”

As the nature of libraries evolve, Bowles said, it’s important to have creative individuals like Payne and Parks devoted to keeping them alive.

“The library, the institution as a whole, is changing. People utilize research in different ways,” Bowles said. “This library in particular has been so generous with enabling us to do this. They have so many programs for people and ways to engage the public and it’s been really great to see that happen.”

As the People’s Library pushes the boundaries on the public institution, Parks said that people are changing the way they view the library.

“The idea that they think that the library is getting kind of cool, I think that’s a really good thing for us and the world in general,” Parks said.

In response to the interest they’ve received from library directors across the country, Bowles said they are working on a how-to manual, so anyone can create a people’s library in their city. In the spring, they will present that model at the Art Librarians of North America’s 2014 national conference and Columbia College’s Center for Book and Paper Arts.

All agree that, along with the materials, the project itself is self-sustaining, which is important to Bowles and Strandquist. Both eventually plan to move forward with other projects.

Bowles said the long-term program will involve two to three VCU interns and two to three high school interns collaborating each semester in leading the workshops, choosing the theme or community they wish to highlight, and ultimately digitizing the collection for an interactive website.

“A lot of the project is just bringing people together,” Strandquist said. “A lot of the things that aren’t in the books are the social interactions that happen in every workshop, the conversations between complete strangers … those to me are the most beautiful components.”